Dhaka is a city most of you probably haven’t even heard of. While it is alike other megacities as Tokyo, Delhi, Beijing, … ranking at the 9th largest city in the world being home to over 20 million people living there.

More recently Dhaka might have come to your attention by the Netflix Original Blockbuster movie “Extraction” (featuring Chris Hemsworth) that just hit the streaming website end of April 2020. Although, most of the movie wasn’t shot in Dhaka the impression of real Dhaka is quite similar – just imagine without all the violence and abundant gangs everywhere.

Dhaka being the largest city and the economical and cultural center of Bangladesh it is most likely the place most travels start – and so did mine.

Arriving late at Hazrat Shahjalal International Airport in the outer parts of Dhaka our only plan was to get quickly through immigration and then off to our hotel. At least that was the plan. You see in most international rankings that Bangladesh finds itself year after year next to the worlds most corrupt countries – and the immigration officers are no different. We had both informed ourselves on visa conditions for Bangladesh (this might fill a whole additional blog entry) and I even had a written confirmation of the Embassy of Bangladesh in Berlin that we were officially entitled for a 14 day visa on arrival as the immigration officer told us he would only give us 10 days. After an intense 1,5 hours waiting in line, discussing with the immigration officer, chatting with some young Bangladeshi/American couple next to us suddenly his mood changed and we got our visa. Maybe they said something? Maybe he got tired of us?

I will never know for sure but this was the first time an immigration officer tried to bribe me. Great start!

Getting out of the airport, buying a sim card and ordering an UBER to our hotel went surprisingly smooth so we got dropped out of the car, past midnight in the middle of a dark street. Where was the hotel?

Up to that moment I never really thought something would happen to me on my travels but that night I was sure we would get robbed, kidnapped or even worse. Not that it is bad enough that you are standing at night in a quiet street without seeing any sign of the hotel you just booked on booking.com. No. Suddenly there was a big guy with a flashlight and a baseball bat who approached us. Me wanting to run away, that guy showed us towards a dark tiny alley – all indicators red but hey that is probably normal here right? So this guy went to a gate, opened it and pointed up the staircase. We went up, in the dark, in a house we didn’t know, in a country we never have been to before and there it was: “Hotel Singapore”. You cannot imagine the relief I felt.

As we woke up the next morning to the sounds of a hustling road we were greeted by Dhaka!

And this is when we first not only saw Bangladesh but also got to experience the incredible hospitality of Bengali people. We didn’t even make it 200m down the road when we hungrily got pulled into a small eatery on the roadside to have some parota with dhal and omelette (later to become my favourite food in Bangladesh). While we sat there Sajal approached us with the littl english he could speak, ordered our food and insisted to invite us for breakfast. While chatting with him he brought us to the railway station and helped us buy our tickets to Srimangal the same evening. That’s hospitality I didn’t expect!

This first day we only got to experience a glimpse of Dhaka as we stayed north of the city center. But as most huge cities in developing countries also Dhaka was a mixture of bustling streets, extreme poverty, dirt and a glimpse of hope. 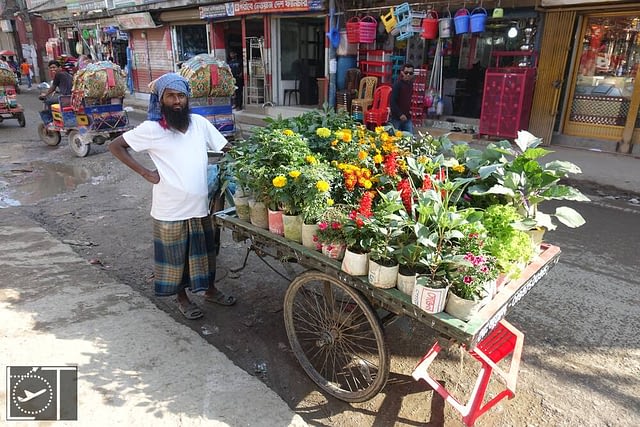 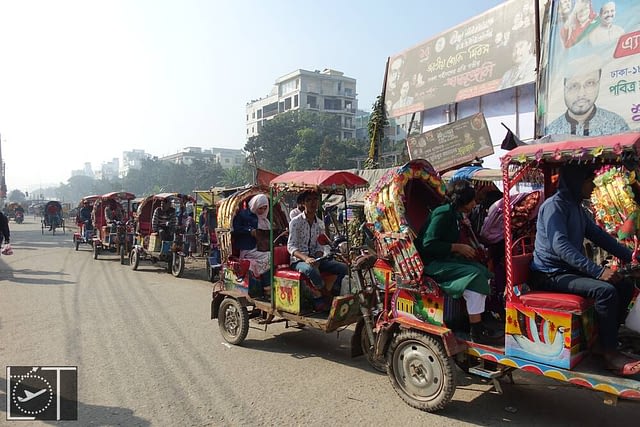 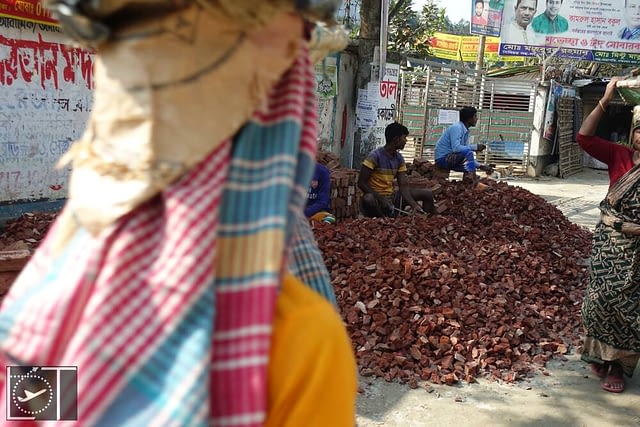 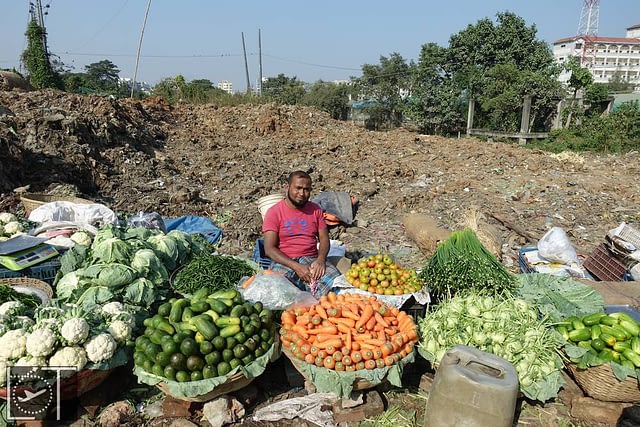 At the end of our trip we got to experience some more of the city of Dhaka. The most interesting but also shocking was our walk through the shipyards of Dhaka. Where they build, repair and wreck ships, children are working barefoot in between toxic fumes, collecting rusty nails to sell for food. Not at all easy to bear. Read more about it in the description of the Map below: 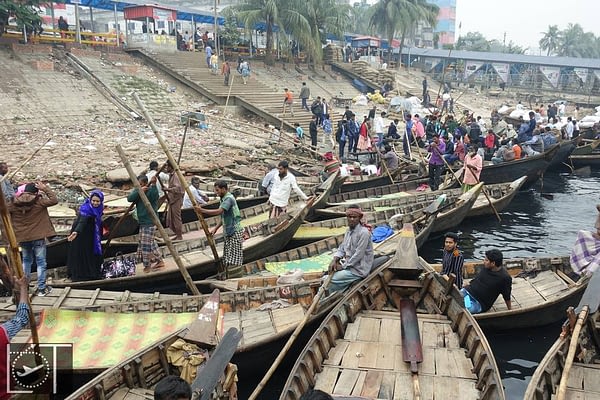 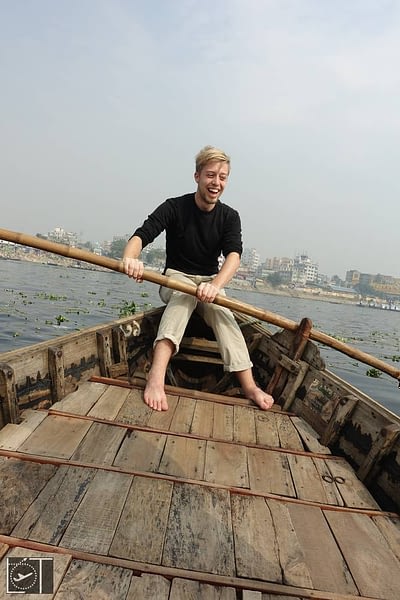 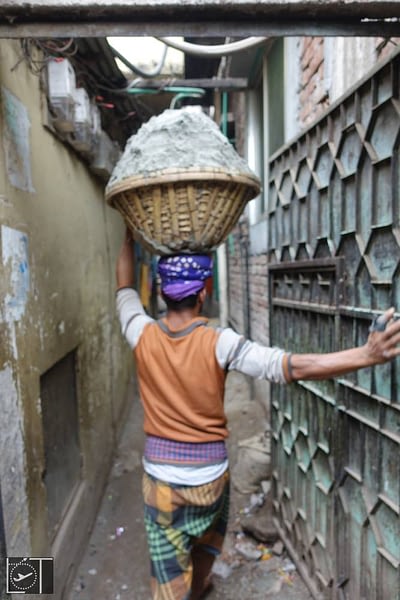 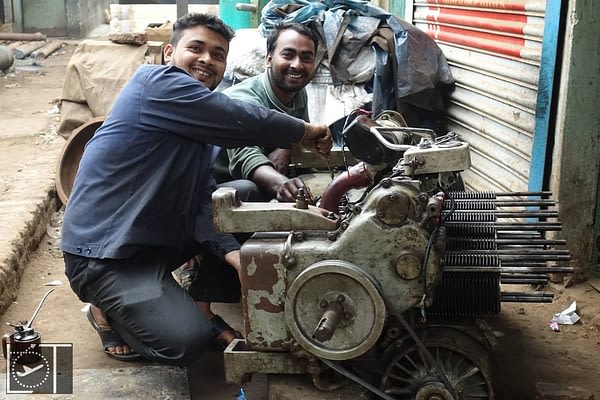 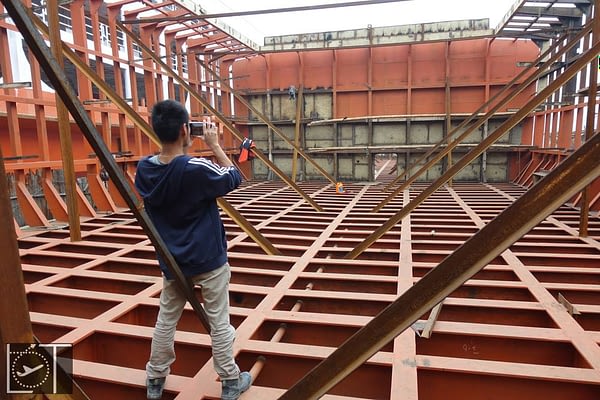 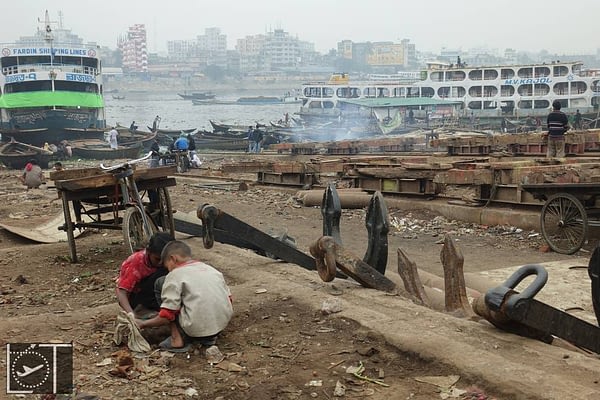 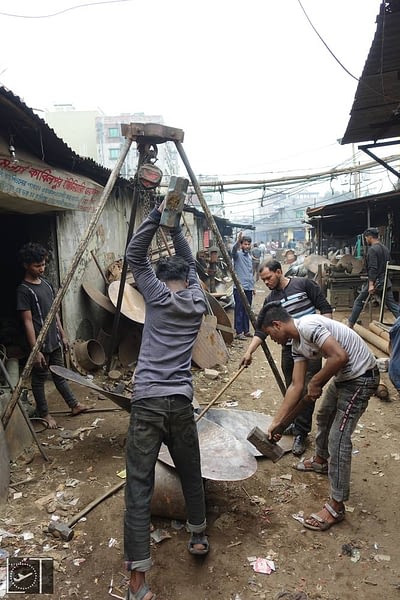 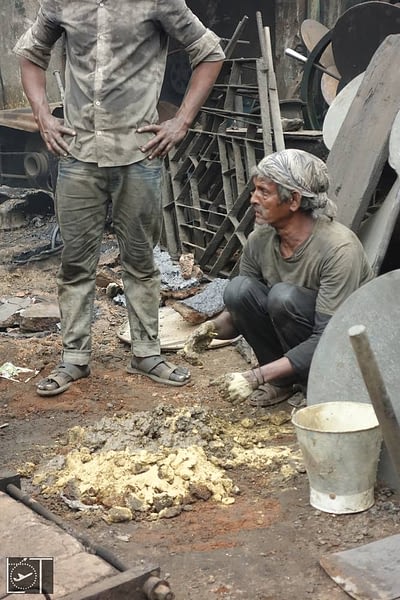 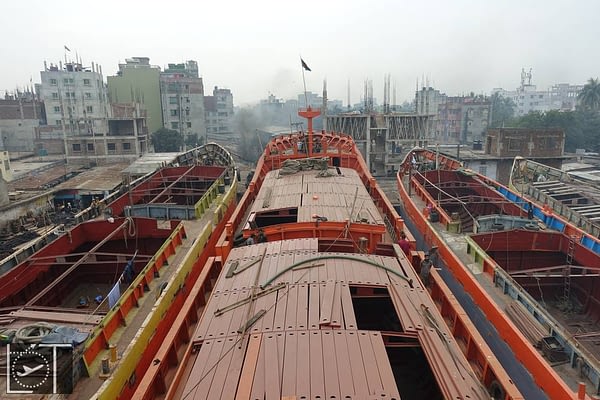 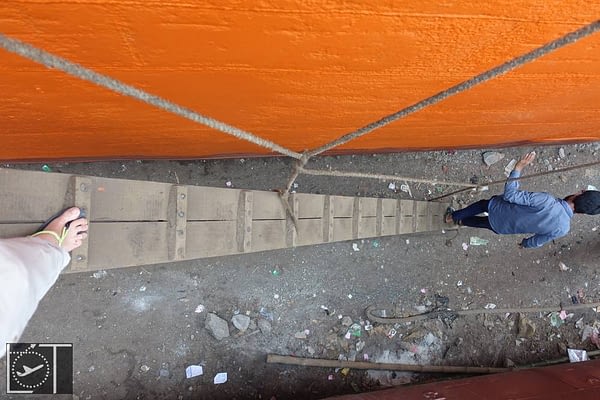 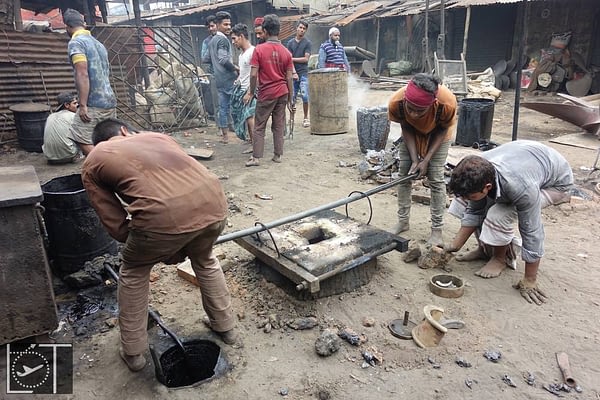 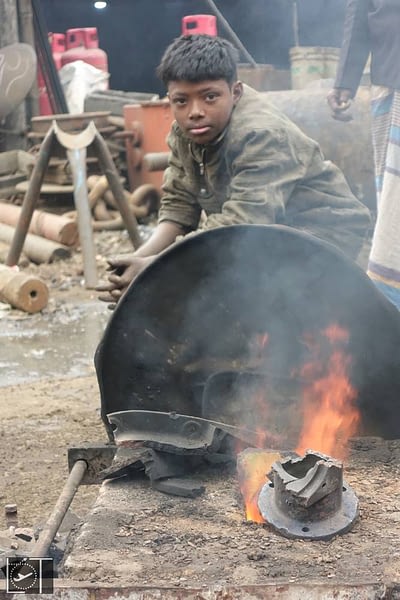 Dhaka is a overpopulated, polluted city with signs of poverty at every corner but nevertheless there are nice spots spread throughout the city. Have a look at the 19th century old palast along the Buriganga river now remade into the Ahsan Manzil Museum. This is easily reachable by foot from the Dhaka River Port and you will walk your way throug a busy market street with vendors carrying around crates of fresh fruit and vegetables. Want some fresh Promgranade?

Hop onto a rickshaw (should be roughly 50 Taka) and go on a ride to the even older Lalbag Fort (100 Taka entry fee) which sits in the middle of rose gardens and offers a relief from the noise of the city. Enough of sightseeing? Then head to the Dhaka New Market to indulge in some shopping for souvenirs, english books, spices … or even a machete?

If you need some more rest, how about walking past the architecturally unique Parliament Building before sitting down in the park to the north where you will find yourself amongst many groups of Bengali people enjoying their afternoon.

The not so old country of Bangladesh went through quite some past to become an independent nation. If you want to learn more about the violent past of Bangladesh head to War Liberation Museum. You’ll be suprised by a modern, well designed museum with english translations. Getting there is a bit difficult but if you can’t get an UBER try to get a CNG (motorized rickshaw) to drive you to Shyamoli and then walk the rest. As of Jan. 2020 the area around the museum was still under construction so don’t be surprised there is no real road. Best point you can get onto a bus directly to the Airport (1-1,5h) from the museum. Ask for directions and there will be someone to point you to the right one.

I have marked all the highlighted spots on the map below and added some of my personal photos. 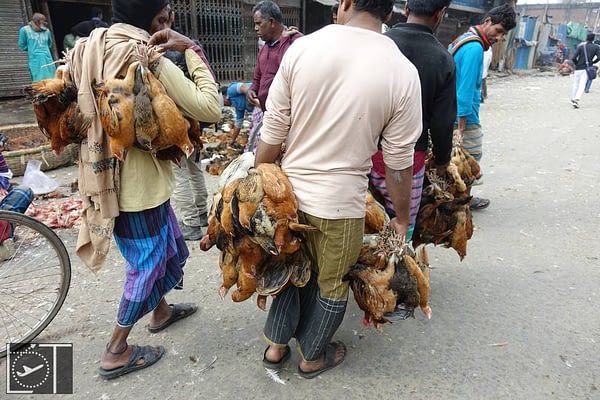 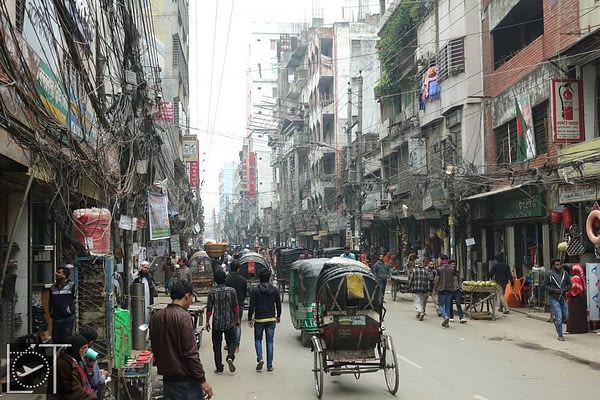 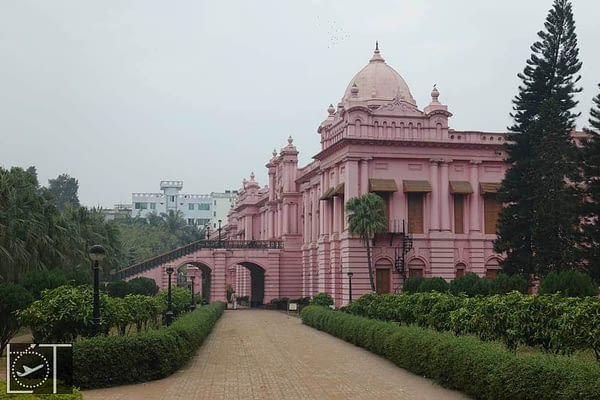 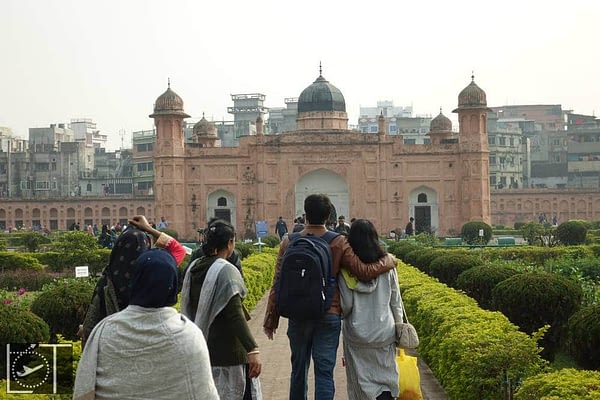 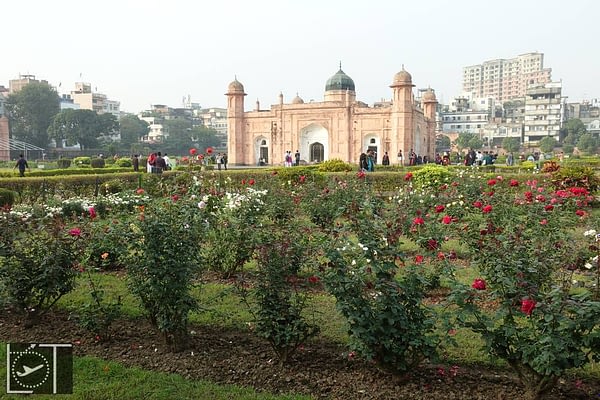 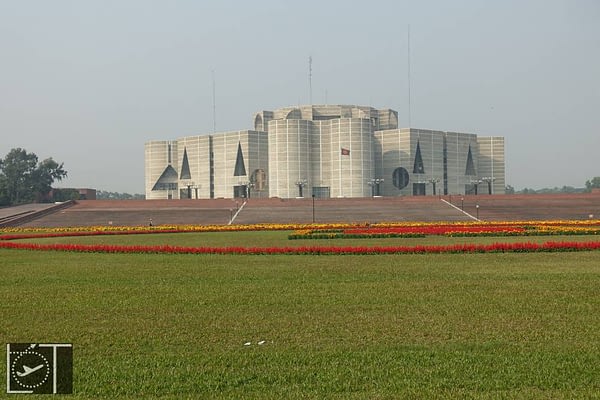 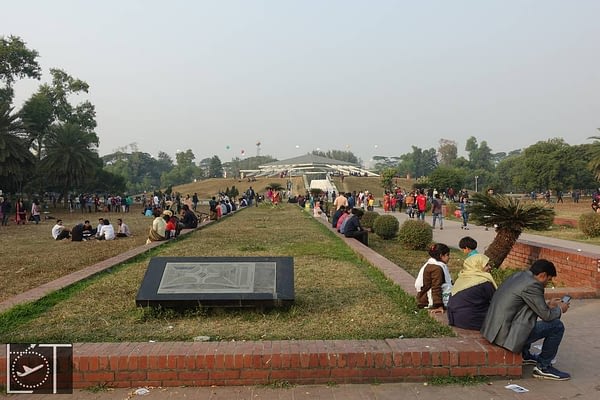 Was Dhaka the highlight of my Bangladesh trip? Probably not. There were lots of ugly sides of Dhaka like when I was literally walking in sandals through streets covered in the leftovers of a poultry market. Nevertheless, the two and a half days we spent there gave me many memories and why not explore a bit when you fly out of Dhaka anyways?

If you have any questions or thoughts I would be happy to read your comment. Lukas

Dhaka, the Heart of Bangladesh

Sydney to Brisbane – laid back costal towns you shouldn’t miss out on!

Indonesia – the land of vulcanos.

How to get from Malaysia to Indonesia!